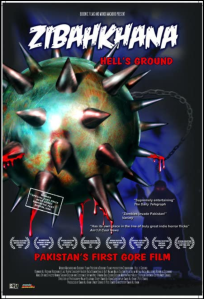 All right now, this is what I’m talking about. A terrific little number with barely an original idea in its head – though that appears to have been the filmmaker’s intent – this Pakistani flick ultimately surpasses its bare-bones budget and its bare-cupboard storyline to produce a thoroughly enjoyable picture. Much of the proceedings are a recasting of The Texas Chain Saw Massacre, there’s an obvious nod or two to Night of the Living Dead, and there’s some camerawork and atmosphere courtesy of The Evil Dead as well (plus the final girl’s name, Ayesha, often is rendered as, yes, “Ash”). Well-paced, and clearly made with the right attitude and healthy amounts of appreciation for the endeavor, its DIY sheen only adds to the entertainment value. Really pretty rewarding, given that it’s “Pakistan’s First Gore Film.” 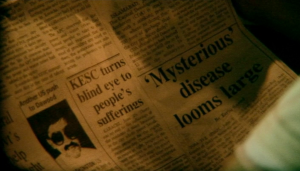 Dude, it’s Pakistan’s first gore film. I couldn’t resist that kind of come-on. (It helped that I was able to locate subtitles for it.) 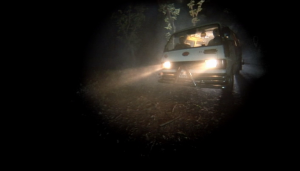 If you actually read this palaver, you are presumably at some level a devotee of this art form, if not an aficionado per se. If you are also of a certain bent, you just may appreciate this presentation precisely because of its … familiarity. 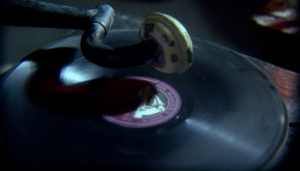 The weapon of choice for the unrelenting maniacal stalker quite amused me, as did the transliteration of the stock young adult characters into a South Asian disposition. “Yah, let’s get STONED, and get that damned radio on, yah?” as Rubya Chaudhry’s Roxy memorably puts it. At times, depictions here reminded me of the original attempt at All Cheerleaders Die. The élan involved is definitely similar, anyway.