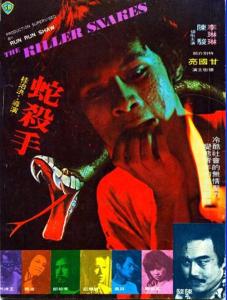 Unusually wistful for an exploitation movie with multiple rapes and plenty of animal abuse – plus more than one guy slapping around more than one woman – this product of the Hong Kong studios of Runme and Run Run Shaw certainly provides plenty of fodder for your rumination. That doesn’t much excuse most of what goes on here, but at least there’s a plot and a story, more or less, to provide some underpinning. And oh man, the snakes. SO many snakes, so often very clearly being hurled across the length of the shot so as to emulate leaping or springing. The secondary plotline concerns what we now call “human trafficking” but just used to call “prostitution.” Plus probably the relationship between greed and rapacity. Boy howdy, is that reading too much into a picture called “The Killer Snakes.”

I won’t lie, it promised to be both lurid and somewhat preposterous. I may have expected more sheer lunacy and less slice-of-life grittiness, however. With the sadism confined to humans.

Although it’s kind of amusing when our protagonist, “Keto,” urges his serpent friends to bite and kill his enemies or oppressors, this is a largely downbeat and depressing feature. Who’d’ve guessed that from a tale of a (literally) beaten-down loser who enlists an army of ophidians to avenge him, and even to perform what he claims is a mercy killing?

Snakes get mutilated, tortured and killed. Maybe I need to vet these pictures better, potential spoilers be damned. Keto’s one outfit keeps reassembling itself, Hulk-like, no matter what happens to him. At one point, he springs monitor lizards on his victim. Those aren’t even snakes, man.