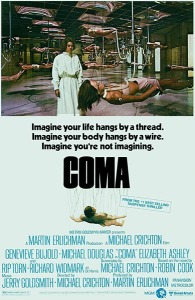 Man, did the ad campaign for this novel and movie combo strike very young me as eerie back in the day. And this film is well creepy enough, though what seemed to be the most troubling aspect when I was 6 or whatever pales in comparison to the REAL HORROR to be found in this science fiction medical thriller from the lens of noted bestselling author and petulant crank Michael Crichton. (The novel was penned by Robin Cook, however, and that was not a Crichton pseudonym.) Genevieve Bujold plays a Boston Memorial hospital resident surgeon who becomes Suspicious of inexplicable goings-on, which she doggedly investigates at her own growing peril. Michael Douglas plays her unsympathetic boyfriend who seems enmeshed in the machinations. Conspiracy, malpractice, Brahmin rants, technological obsession, it’s all there. Credulity may be strained.

Basically, because I’d never seen it. I was in an indecisive mood, came across this title and thought, yeah, seems like the right time.

Why not enjoy a blockbuster hit of yesteryear? I myself “like” being reminded of how wonderful the U.S. healthcare industrial complex was, is, and always shall be. 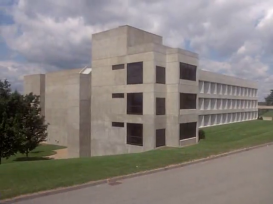 I’m told the mysterious “Jefferson Institute” is an example of “Brutalist” architecture, but I was distracted by debating how certain 1970s visual aesthetics in this picture related to those in cinematic adaptations of Crichton material that he didn’t himself film. Along with presumed similarities between Crichton material and this production’s source. (I haven’t read the Cook novel.) It was hard not to contemplate the fact that Crichton was, of course, trained as a medical doctor. Michael Douglas is really good playing a jerk, no big surprise there.