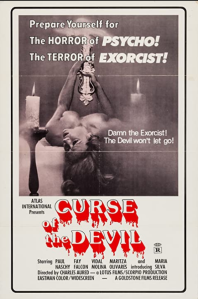 Golly, I wouldn’t have expected this ridiculous piece of trash could get even better, but it turns out it’s the SEVENTH in a series – and according to Wikipedia, “This film ignored the events in all of the earlier films.” Same actor as the werewolf, though! (Paul Naschy.) And what was the next installment? You guessed right – Night of the Howling Beast! I knew I recognized la bestia. To be completely honest, I’m not even sure what the most farcical part of this production is,

but all of a sudden all of the villagers simultaneously decide it must be a locally roaming werewolf that’s responsible for a string of gruesome crimes, so that might have to be considered. There are 12 of these! TWELVE. The title that preceded this one in the series was Dr. Jekyll y el Hombre Lobo. I have no words.

See, it’s called “Curse of the Devil” – this release is, anyway – and this is the IMDb description: “A man whose ancestors executed a witch is turned into a werewolf by modern-day descendants of the executed witch.”

See, the thing is, I don’t even particularly care for werewolf pictures. Even for a dubious genre such as horror, the theme stretches the bounds of credulity for me. 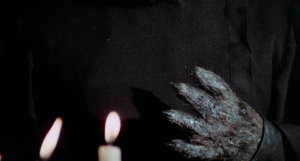 This is another of several recently watched flicks whose English dubbing and subtitles don’t match at all, leading me to wonder which one deviates more from the original scripting. (It’s extra fun when there’s more than one English subtitle track, and they’re different!) The story here starts out with some ambition but goes nowhere in particular, and the genesis of the curse doesn’t make much sense.