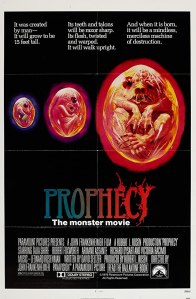 Boy, does this one feel like a missed opportunity. Compelling despite itself for the majority of its running time, this cautionary eco-terror tale collapses drastically once the “monster” is revealed. Because it’s a bear. Sure, it’s an ursine that appears kinda acid-damaged (no, not that kind), but it’s a bear nonetheless. Which is quite a letdown, given all the Science-y gobbledygook promising mutations and devastation of the food chain and so forth, and renders this production not unlike a handful of other such endeavors about rampaging animals. Until that reveal, however, it’s an engrossing flick that works pretty well. The usual caveat applies about giving the details of the story too much thought. Especially those that are glossed over in the first place.

I had just finished the David Seltzer novel and felt it must have been filmed at some point. It turns out he wrote the script first.

If you plan to, I’d recommend reading the novelization beforehand. It helps fill in a lot of backstory. Of course, it may also contribute to a feeling of disappointment with the screen version.

The monster is supposed to be humongous – some of the promotional material specifies “15 feet tall” – and it isn’t. It’s, you know, bear-sized. Except when it’s smaller, because it’s a guy in a monster suit. Other than that, this picture’s biggest problem is that it pares away the relationships intended to give events their gravitas. The allusion to Minamata disease is indeed frightening, even if the source material fails to note the outbreak amongst First Nations people in Ontario, Canada, that must have inspired the proceedings.