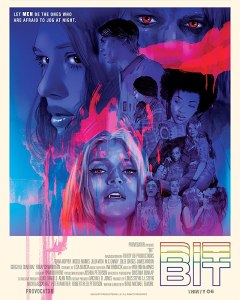 So, the general premise here – young person seeking definition finds group of vampire peers – may not sound very fresh and exciting, but … the hook is that the young person is transgender, and the vampires are militant feminist lesbians. Hey, you got your polemics in my genre picture! (Men in particular take it on the chin here.) And I almost skipped over it just because that description sounds like a bit of a forced narrative. As I’m a cis male, though, maybe my perspective is skewed. But I AM gonna grumble that it’s set in L.A.. How come no young person can find fulfillment in a coming-of-age tale of self-discovery set in, like, Dubuque? Or Des Moines, perfect example. Ultimately, there’s no real empowerment message here, and in fact I’d wager there’s an anti-defamation group or two out there just stewing, alongside the fundamentalists. Hell, in one reading, the transgender arc can be spun as negative . Either way, the conversation happened, ya dig. This picture did remind me of The Lost Boys, though, which could be a troubling sign since I’ve never even seen it. 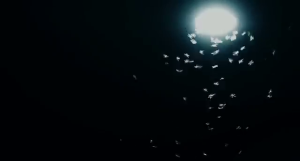 A spot of banter in the trailer.

No fooling, if you like to debate coded messages, you could have a fun time with this one. 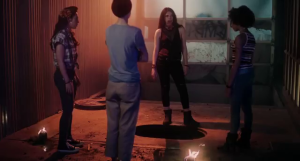 Despite the clunky and perhaps cliché setup, and pointedly misandrist diatribes notwithstanding, the LGBTQIA+ bent didn’t strike me as a contrivance … because it isn’t presented as such. That the embodiment of the central metaphor is allowed to have personality flaws instead of bearing the standard of wishcasting idealism is instructive. Which doesn’t preclude the potential for friendly fire from obstinate axegrinders, unfortunately.

Rating from outer space: B