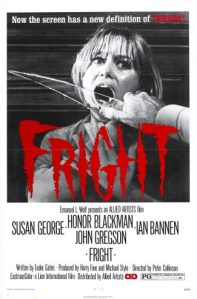 This title might seem a misnomer, as this mild-mannered British production does not provide its audience much in the way of chills or thrills. For characters in the movie, I suppose the moniker may be more apt, but many of the emotions on display are too restrained for such easy classification. Some anger is displayed, sure, and the young lass played by Susan George spends much of her screen time FREAKING OUT – her mewling, whimpering, sobbing, puling and so forth obscuring her Saxon patois till it’s all but incomprehensible at times – but all this really accomplishes is to annoy the living hell out of certain viewers, such as this one. This film actually is more or less a rumination on various mental states, and does not convey the sensation one reasonably might expect. It does, however, contain a few oddities. The police are depicted as almost comically inutile, seemingly by design, and a thought-provoking sequence involves one of them getting “the gun” out of its secure locked storage. Cultural differences! In addition, one of the characters is a toddler who seems sedated throughout much of his screen time.  Overall, the picture feels rather disjointed and haphazard.

I was scouring lists of pix I’d considered and could remember nothing about this one. I looked it up and thought, oh why not, 1971.

Unless you want to catch an eyeful of some early ’70s ladies’ fashions, there’s no real reason to do that.

The outmoded attitudes towards any variety of ideas or concepts, including but not limited to mental illness and a woman’s capability and/or agency, provide some food for thought. The ending is spectacularly unsupportable.