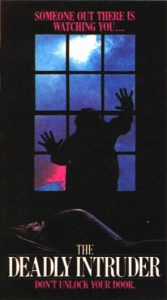 By almost any reasonable measure, this straight-to-video extravaganza isn’t any good. And yet it manages to project a kooky kind of charm, possibly because some aspects of it are just so … off. Unlike some of the other bad films I’ve denigrated herein, the filmmakers involved in this venture seem to have known what they were doing, but just do not appear to have been very proficient. Take the editing: the cuts interspersing glimpses of the characters’ domestic lives with the mounting terror, etc., are so ham-handed it’s jarring. The dialogue, meanwhile, continually interjects minutiae into random conversations. And then there’s the music, which at a certain point reaches a kind of lunatic insistence that is sorta breathtaking. On top of all that, the SHOCKING twist almost could work, but for anyone who for some reason is paying careful attention, one line rings a few too many bells, even with the painstaking misdirection involved. Classic ending, too. Oh, and one extremely minor character disappears during the climax, never again to be glimpsed or mentioned.

I could not ignore the creative and descriptive title.

Probably not on purpose, but it is a good way to contemplate the Platonic ideal of straight-to-video.

I really don’t want to ruin the fun for anyone who might theoretically watch this, but the scene in which an assailant takes his victim on a picnic obviously is unparalleled in cinematic history. The blatantly obvious use of a body double in the nude bathing scene is also top-notch. An early scene in a “police station” that is a glorious example of why-bother set dressing features an extended, juvenile scatology gag.