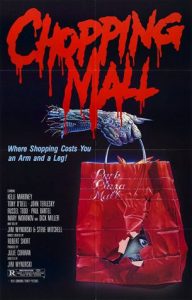 It’s a shame SPACE RATS has this capsule format, because the old me could’ve written thousands of words on the sociocultural implications of this classic. (The old me was a blast at parties.) That being said, it must be allowed that this is very nearly the perfect schlock horror creation. It’s a little too knowing, but it was produced by Julie Corman, husband of Roger, and if your producer’s last name is synonymous with the genre – having more or less invented it – that may be hard to avoid.  To be clear, this isn’t really much of a “horror” picture, either, and the revamped title (it was initially called “Killbots” for theatrical release) is wildly misleading, as no “chopping” occurs. The rogue security robots, however, are a delightful mixture of Battlestar Galactica Cylons and the Stern Electronics arcade game Berzerk, and a clear precursor to elements soon to be seen in RoboCop as well. The acting is wooden at times, the dialogue obvious and stilted, the continuity questionable and the FX often hilarious, but when the day is saved by … explosive paint? Well, you’ve got a cult smash on your hands, and deservedly so.

I’ve had it for at least a decade, so it seemed overdue.

rating from outer space: b