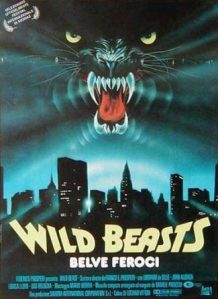 When was the last time you saw a cinematic character killed by a rampaging elephant? Like, by strangling. Yeah, that’s what I thought. Wild Beasts is the kind of dubbed foreign flick that makes me wonder what the original dialogue was, although I’d be willing to bet not a whole lot of nuance is lost with translation yielding “She’s not crazy, she’s being chased by a cheetah!” and “What the hell is that! Elephants!” The production did a pretty good job with the scenes involving people being mauled by various wildlife, given obvious limitations. I’m glad I watched a murky VHS upload, however. That made the scenes featuring animal cruelty a bit easier to handle. The one in which a cat is ravaged by rats I could even believe was faked. Others, such as when lions and hyenas attack cattle and pigs inside a stockyard? No such luck. The film ends abruptly, without explaining how the zoo animals and a group of children – but apparently no one else – got dosed with PCP, despite wrapping up with a screenful of gibberish.

Well, I somehow didn’t even consider the implications of inhumane practices given when, where and by whom it was made.

Despite the many unintentionally funny moments – there’s a “Stop the presses!” scene, the runaway elephants cause a plane crash and resultant blackout, and so on – and the absurd pseudo-ecological message, it’s hard for me to recommend a picture that claims circus animals and trainers among its cast and crew.

Some intriguing orchestration accompanying the animal attacks is unexpected … as is the animal control officer wielding a flamethrower against hordes of rats, exemplifying this picture’s major problem. 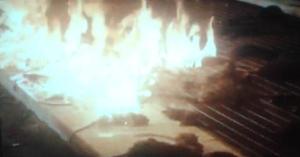