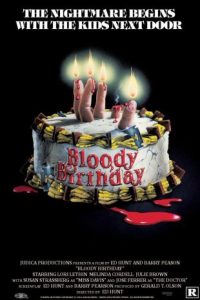 Looking for some movies to watch during the MLB All-Star break, I came across this title and, as I read the synopsis and noted the release date, was flabbergasted that I’d never before even heard of the picture. Then I watched it, and the reason soon became apparent: it’s not very good. And though I’ve seen mild claims that it may have attained cult status, I don’t think I believe that revisionism, as the goings-on here can’t sustain enough appeal of any sort to induce such an outcome. Not that it isn’t entirely without merit, mind you; a murderous trio of preteens is compelling, especially as the three seem to be of perverse inclinations besides just their predilection for killing. Too much goes undeveloped, however, especially the ostensible motif of an astrological underpinning to the youths’ malevolence. The acting on display is not highly polished, either. All in all, this one comes across a little too much like a genre exploitation cheapie.

As related above, I just kind of found it and wondered why I hadn’t known it existed, and thought it sounded encouraging.

Unless it’s because you uncovered it in a time capsule, that’s probably not a worthwhile endeavor.

The bedroom of the character Beverly, who is played by alleged musical comedienne-to-be Julie Brown, features posters of Blondie, Ted Nugent AND Van Halen (and … Roger Daltrey?), and is also the location of the most blatantly extraneous nudity in this spectacle. Oh, and Beverly’s murderous sister Debbie is portrayed by the same little girl as the one Jake claims he wants to buy while sabotaging Mr. Fabulous’s high-paying maître d’ gig at the Chez Paul in The Blues Brothers. One or more of the murders doesn’t seem at all feasible. 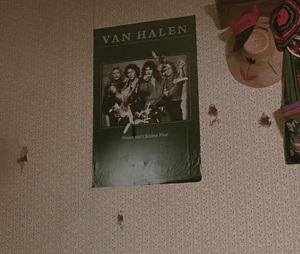