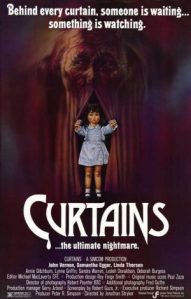 Actually directed by cinematographer Richard Ciupka, this portentous Canadian romp isn’t dull, as it contains enough quirks to amuse viewers while they’re wondering who’s doing all the killing. It is a bit more restrained – or sedate, both being apropos with the mental health subcontext – than one may anticipate when perusing the plotline: six female actors (or two actors, a comedian, a musician or perhaps model, a dancer and an … ice skater) are summoned to a remote, sprawling manor to audition for a plum role at the behest of a paternalistic, prurient director named – could you believe – Jonathan Stryker, smugly played by John Vernon as an overblown, imperious caricature. Exactly why this desirable role is up for grabs is more or less the driving force behind the inscrutable developments, the explanation of which dovetails nicely with the poignant conclusion. More of an old-fashioned drawing room mystery than a contemporary ’80s slasher, even if it retains many stylistic elements of the latter. All told, it presents (to me, anyway) an etymological quandary: Screwball, or “oddball”?

WHY DID I WATCH THIS MOVIE?

Wow, have I watched a lotta Canuck films lately.

SHOULD YOU WATCH THIS MOVIE?

Somewhat uneven and a bit of a farce (by design, that is, not through ineptitude per se), it would most likely be a change of pace.

The blasé manner with which one of the characters presents her misdeeds is fetching, and the discontinuous structure is noteworthy, as it randomly presents what appear to be two solo performance scenes, but I wasn’t kidding about the ending … and there’s the downside. Troubled throughout its production, the core of a really splendid achievement instead lies strewn about the remnants of its shell.

RATING FROM OUTER SPACE: B−