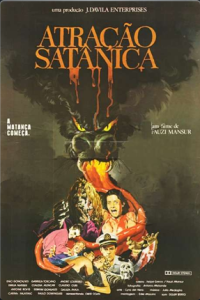 This picture straight from the Brazilian scrapheap is almost completely incoherent. With less than 15 minutes left, the chief of police exclaims – and not for the first time – “but none of this makes any sense!” He is correct. “Satanic Attraction” rivals Maya with its puzzles about who some characters are and what exactly their role is. (Unlike that headscratcher, however, this one isn’t any fun.) Is that a police boat? Why is the heavily pregnant Reporter always wearing a bikini top? Wait, did they just forget that character’s identity? Who is that guy, and what in the hell is he doing here? Possibly the drollest element of this nonsense is its radio-show narration, part of the convoluted sense of SOCIETAL TERROR and OFFICIAL OUTRAGE that you won’t buy for even a minute. But most amusing is that this picture was filmed in Portuguese in Brazil, and the version I watched was dubbed in English but subtitled in … Portuguese. Which doesn’t appear to agree directly with the dubbed dialogue. Which per the usual doesn’t equal the “drama.” 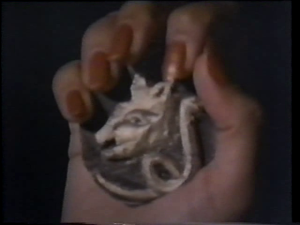 Well, I WANTED to watch a different Brazilian picture, Shock, but apparently no subtitles for that one exist. This hot mess was suggested as a fill-in, and rightly so.

I know there’s a lot of fans of bad, bad movies out there … maybe you’re one of them.

The “police work” in this film is really something. This may be excusable, as the victims’ bodies are never anywhere to be found – though somehow the victims are still identified as such. One such casualty, who naturally is taking a bubble bath, fails to realize that a razor blade has been embedded in her bar of soap.