So, “Dracula” as the world knows him doesn’t really appear in this movie – but an “Igor Dracula” does, along with one last descendant, a modern family man named “Michael Drake.” The story, such as it is, is a cockamamie concoction about a canine that I. Dracula long ago enlisted for some reason or another, along with its former owner – this picture’s Renfield, essentially – a quasi-vampire that can wander around in the daylight to do his bidding. Here, having been revived and in need of a master, these servants want to deliver M. Drake to his legacy. (Did you know that if you remove the stake from the heart of a vampire or near-vampire in its coffin, it comes back to, uh, “life”? I didn’t.) I cannot possibly convince you how preposterous this film is. I would like to point out, however, that relying on dogs to be your lead actors is not the world’s greatest idea.

A “Dracula” flick without Dracula, but with his … dog …

It will certainly make you laugh – though it’s debatable what kind of laughter it will provoke – but unless you really want to see how NOT to make a movie, it’s not worth it.

I did mention that this pic relies on dogs to carry a lot of the action, right? Zoltan himself dismantles the roof of a cabin at one point while his comrades compromise the walls. The overdubbed dog noises are also pretty special – barking, howling, growling, you name it. Nothing, however, tops the experience of repeated shots of loyal servant “Smit” staring idiotically into the camera while a voiceover intones “ZOLTAN.” 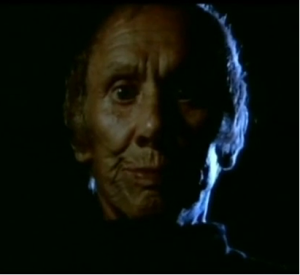 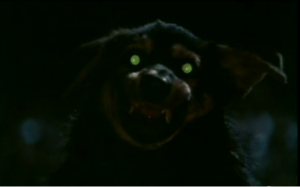