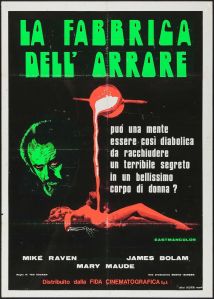 A daft look at the capital demands of the post-heyday Swingin’ London art scene – no, really, that’s the initial setting here – this British suspense flick takes a significant turn for the weird after little over an hour. By which I mean, a secret hidden passage that cannot possibly exist is discovered by a character who should find it incredibly disturbing, but neither she nor anybody else reacts strangely. (That our two protagonists accept a great deal of eccentricity may be another nod to their milieu.) From that point on, you expect to be surprised whenever it’s finally revealed who’s doing the killing, and you just may be, because the explanation comes out of absolutely nowhere. Then again, by that point, since the event around which the film revolves occurs before the opening credits roll, your only reaction may be a shrug.

The title of this one beckoned me with the throwback 1970s cinematic experience I was seeking. 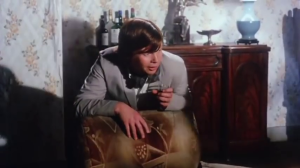 While it sounds as though at the very least it might provide some campy fun, or be a forgotten classic of taut suspense (or something), it’s really just a fairly boring low-budget flick with some extremely annoying characters.

The absolute absurdity of the secret-passage sequence definitely qualifies it for one of these categories, if not both. Once the insufferable antagonist really finds his groove, he’s responsible for splendid pronouncements such as “The power of EVIL is always stronger than that of good.” The way a key detail eventually proves to be related to the mysterious goings-on is patently ridiculous. Oh, and Han Solo’s fate in The Empire Strikes Back is reminiscent of this picture’s underlying motif.