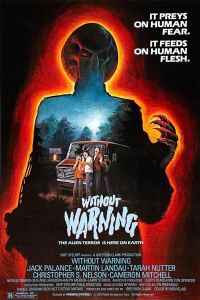 The kind of movie that plays as though it was made for TV, this tale of inscrutable attack by unknown airborne sources is likable enough, though it can’t offer very much in terms of thrillng, fast-paced action. Really, this is the sort of eerie offering that would suffer greatly with the advent of the slasher craze. It also suffers greatly from some narrative confusion, although I will be honest and tell you that doesn’t matter much in the grand scheme of things. (You’ll catch on.) As is often the case in films of this ilk, much of the tension and action is generated by the interactions between the townfolk and the kids with the crazy story and the few strange locals who might be inclined to listen and might just know something, and so forth.

I can’t tell you it wasn’t because the title didn’t make me not think of this number.

Highly redolent of its era, it also seemingly harks back to SF films of the ’50s. It did not have much of a budget. I do not seem to be answering the question.

Though his character eventually wears out his welcome, Martin Landau invests his PTSD-laden “Sarge” with much conviction, and as “Sandy” and “Greg,” two actors who wouldn’t find much work past 1982 (“Tarah Nutter” and “Christopher S. Nelson,” respectively) do a reasonably convincing job. This is also future NYPD Blue/CSI: Miami star David Caruso’s first credited role, albeit a disposable one. Some of the creatures deployed are more amusing than frightening, though they do lead to the wondrous exclamation, “It’s eating the windshield!”