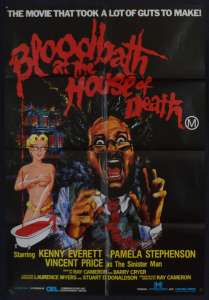 This intermittently amusing English spoof may well have struck me funnier were I British, or approximately 10 years old. (I believe you call an affair such as this one a “broad farce.”) The production is rife with personalities and/or characters that did not resonate with me, and the less said about much of its sense of humour, the better. That being said, it had its good points, with Vincent Price’s absurdly campy centuries-old malevolent priest being a particular highlight. Although a few gags are repeated until maddening, and the overall story – once it eventually (almost) coheres – appears to belie its original aim, this film might hold dimwitted appeal to fans of … lowbrow British television. Not really my spot of tea. 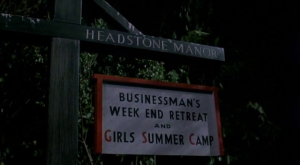 By now you know I will watch anything with a title such as this.

Anglophiles might enjoy placing the various performers in context of their larger careers, I guess. 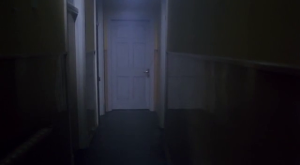 Vincent Price’s initial monologue is so delightfully overwrought it surpasses parody and becomes a true work of comic art; indeed, it is hilarious enough a moment that it sustained me throughout the rest of the film, which is largely lazy and witless. A few other vignettes – an S&M-tinged religious flashback and a scene involving phantom sex among them – are curious enough to add further impetus to the viewing urge, but even the more successful tropes feel halfhearted at times, and a handful of random contemporary allusions (among them Star Wars and E.T. ) either feel misguided, serve little purpose, or frankly are just kind of baffling. Oh, and the ending curries (sorry) more than a bit of a Rocky Horror vibe as well.