written and directed by john lechago 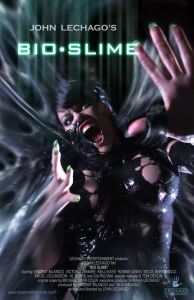 A digital-video delight, the sort of very independent production whose cast largely doubles as its crew, and the fitfully heroic tale of a dissipated artist with some dissolute acquaintances, this particular “Contagion” likely ranks as the first SF horror epic in which humanity would appear to be saved by a meth-lab explosion. (Should you not be aware that the next sentence would read … OR IS IT, apply immediately for Remedial Thriller 101.) Dubious fun from start to finish, with most of the action occurring within a down-at-its-heels tenement populated by the aforementioned meth lab, the drunken artist’s “live-work space,” a pornographer, and various hangers-on and ne’er-do-wells, the story is set in motion by a mysterious criminal transaction and some poor decision-making skills, and mutates from there. A SHOCKING ending is included at no extra charge. 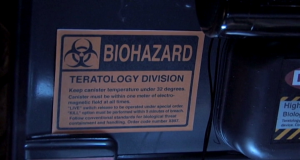 I found this picture under the title “Bio Slime,” and naturally thought I needed to take a gander at it – a wise choice.

Why the hell not?

Honestly, Vinnie Bilancio’s depiction of the dipsomaniac struck a chord, thanks to my extensive personal research on the condition. I particularly enjoyed it when he decided to go ahead and start drinking the denatured alcohol he kept around to clean his brushes or remove paint or whatever. That’s some quality realism there. The FX are a mixed bag, mainly consisting of a lot of latex and some lights and hoses, but the deft characterizations of the different personalities and the mysterious nature and affiliation of the “specimen” from the “Teratology Division” are spot-on. The film also brandishes just the right amount of excessive taboo sleaze and black (bleak?) humor.