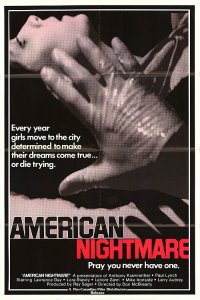 Like the preceding selection, this movie features a lot of footage of strippers, but this Canadian picture manages to do so without it feeling particularly sleazy or exploitative. (Of course, the synopsis “mysterious killer preys on strippers” probably didn’t hurt with potential investors.) There’s more of a working-class focus, really, but portrayed within usually seedy locales. This viewpoint may be especially evident in contrast with the moneyed interests represented across a wide family divide. Our moody pianist protagonist doggedly pursues faint clues until he uncovers a terrible secret, which ultimately serves to mask a sociopathy masquerading as altruism. Along the way, two damaged people learn a little bit about love. WILL they survive the experience.

I wanted to throw another ’80s picture into the mix, and I’d been putting this one off.

It doesn’t especially stand out, though its sociological perspective on affluence (or the lack of same) is pretty interesting, given that it actually was produced in 1981. Plus its disdain for the American ruse, of course.

As is often the case in this genre, after the big reveal, you’d be best served not to think about any of the ramifications of what you’ve learned. Canadian film fans might enjoy another pairing of Michael Ironside and Lenore Zann, though the former’s role is surprisingly unimportant in the long run and the latter’s only serves to propel a plot device. And for a flick in which the main character inquires, “Did your reports tell you that she’s living in a SLUM? Surrounded by DEGENERATES?” the treatment of its sex workers and other assorted misfits or marginal types is in large part nonjudgmental.