written and produced by warren chaney 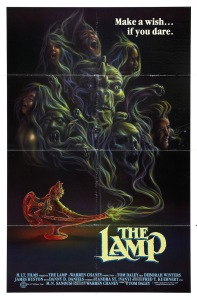 Cheezy hack work, to be sure, but ultimately a witless good time, this preposterous time capsule of best-forgotten ’80s fashions and quick-buck hucksterism boasts a confused mythology, brutal edits, continuity issues, and a general lack of coherent purpose. What it does have are some ridiculous stock characters and flimsy FX, including the

always welcome glowing eyes of the possessed. But in the great tradition of films in which terrible things happen in museums because of ancient relics – such as in, oh, say, The Relic – once the dubiously vengeful evil genie is conjured, it … well, actually, that happens a bunch of times, isn’t confined to the museum, only vaguely seems to involve the LAMP and, uh, see … 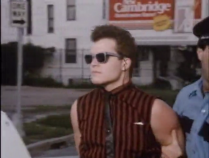 When I see a title mentioned more’n once on lists with names such as “Worst Movies Ever,” I usually gotta know more.

Oh, absolutely. The heights of absurdity you will scale will reward you immensely. 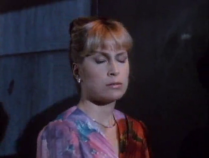 The fetching ensemble worn by our lead actress, Andra St. Ivanyi, as the “teenage” Alex Wallace, is itself enough of a marvel to demand viewership. (Don’t discount the “new wave” getup preferred by major human antagonist Mark Mitchell as privileged baddie Mike Daley, however.) For my money, it’s hard to top the scene in which one of the girls is taking a bath in the specimen room at the museum (don’t ask) and is set upon by

what appear to be revivified cobras, although the computer sequence when our heroes search for their salvation is also top-notch. And the genie itself – sorry, “Jinn,” we need to remain historically accurate here – is incredible, in the truest sense.