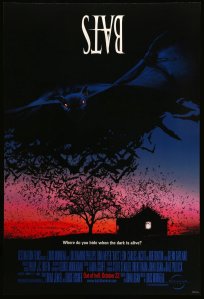 A typically dunderheaded nature horror predicated on an “accident,” this flick features not one believable element. You will not believe that Dina Meyer’s character is a bat expert with a Ph.D., you will not believe that Lou Diamond Phillips makes a creditable sheriff, “Leon” doesn’t even always seem to believe he’s supposed to recite his character’s lines, and you certainly won’t believe the BATS are real for even a second. In other words, it’s quite the enjoyable waste of time. The BATS, of course, “escaped” from some sorta experiment-cum-military project. (Maybe.) A wannabe Halloween blockbuster that somehow made money, it would’ve been perfect brainless summer fare. Oh, by the way, the predetermined ending isn’t believable, either.

I was in the mood for just this type of highbrow feature. Actually, by my standards, I was veritably giddy with anticipation.

What ELSE are you doing?

The BATS. Oh my my my, the BATS. Some are animated. Some are animatronic! Some are bat size. Some are, like, scary-movie-bat size. And once in a while, for effect I assume, one or two are the size of goddamn turkey vultures. Plus, the very first time the BATS kill anyone, they rip ’em to shreds. After that, they … don’t. These facts more or less encapsulate the professionalism imbued in this endeavor. Also quite humorous: the ongoing “hints” that the obviously nefarious scientific foil is concealing a dark secret. Stock military footage is thrown in for good measure, along with a rather remarkably turgid action sequence. Somewhat surprisingly, few overt attempts at comedy are present. But as Steven Wright observed, you can’t have everything – where would you put it?