I’m not certain this Spanish production qualifies as “horror,” even if the plot consists of a seemingly fallen priest committing violent crimes in the hopes of negating the birth of the Antichrist. Alongside a slacker “death metal” adherent and a bullshit mystic television seer. On Christmas Eve. (The tale takes a little longer to cohere than that synopsis might indicate, or at least it did for me.) Although a bloody account, any terror involved is confined mainly to the implicit realm, or attributable to a mysterious roving gang destroying property and killing people while urging the authorities – presumably – to “limpia Madrid.” (“Clean it up.”) Drugs, semiserious bodily harm, mayhem and some second-tier FX complete the recipe. It’s fun, the comedy is deadpanned about as well as possible, and certain juxtapositions add just the right touch. Alongside the sacrilege. Make it a holiday tradition! 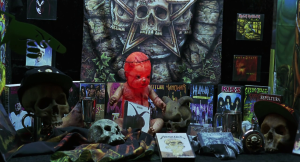 See previous entry, and sprinkle liberally with Luciferian intrigue. Plus, I’ve been learning Spanish for over a year, and every little bit helps.

Where ELSE are you gonna see the Three Wise Men gunned down by police? (You don’t have to answer this question if you’re in the “United” States, for fear of reprisal.)

This is no game. Ángel (the priest, of course) and José María (the ne’er-do-well metaller) make for a great duo, and the uneasy triumvirate they form with “Professor” Cavan also is fruitful. The intricate layers of symbols and references belie the film’s breezy, slapstick nature, as does what ultimately proves to be a rather somber final series of notes. Many, many aspects of modernist commercial existence are targeted for commentary, however oblique.