It is inevitable that this picture will make viewers think of The Blair Witch Project, even those like me who haven’t seen the precursory feature. Truth be told, this production brought to mind a passel of other films as well, although largely as vague hints or impressions, mainly evoked by the hallucinatory effects of people losing their grips on reality as they head into the hills. (One such flick that I’ve reviewed here would be Cold Ground.) Philosophical implications abound – especially the metaphysical – and the fact that everyone winds up alone in his or her struggle for life, though perhaps not so profound, reveals itself gradually enough to be quietly impressive. The ending, not so much … but points are awarded for the overall lack of any explanation of the events. Sometimes a mystery just is, and as forest service representative “Cy” points out, one needn’t go seeking answers for every question. (“These questions … never needed to be fuckin’ asked” is how he more colorfully puts it.) 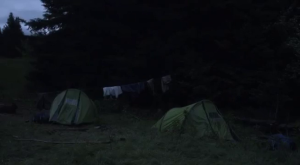 It was recommended to me in an online forum. 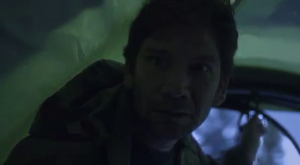 That isn’t the worst idea, though you may not be convinced for a little while. But for such a deceptively simple story, there’s a lot to ponder.

When we meet a new character – a potentially suspicious one, at that – and discover that her name is “Liv.” I’m laughing right now thinking about it. The sound FX, and occasional lack thereof, often can be quite stunning. This feature also maintains a bit of a mockumentary feel without resorting to the “found footage” canard. The “Wizard of Oz” link is debatable; other moments of referentialism suggest themselves.