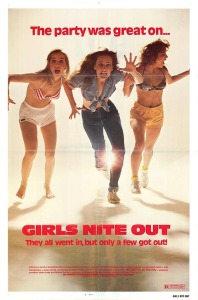 Jeez but the “girls” in this flick got some foul mouths on ’em, buddy. Although a copycat movie about a copycat killer – or IS it – WHOMEVER it may be – some surprisingly nuanced characterizations give this slasher ripoff a bit of its own personality, at least. The actors are all too old (of course), but I gotta say, those writing for ’em captured that peculiar tinge of collegiate life, where personas can get a little cloying and foibles are more apparent than their wielders probably ever dream. You will recognize elements exhibited in Graduation Day and replicated by Happy Death Day, and maybe even recollect The Prowler, if you’re that unlucky. Plus many more! All told, it’s passably entertaining, though.

Uh … yeah, I watched some of these pictures I’m now posting so long ago that I’m gonna hafta guess my motives in some cases. This one I think was because it’s an early-’80s slasher that was unknown
to me and the screenshots looked interesting,
maybe. 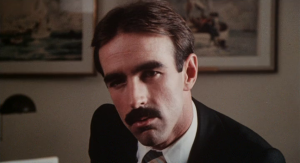 If, like me, you remain fascinated by just how many different ways people could think of to make essentially the same movie, many during the exact same time period – and you’re also enamored of the
ongoing permutations of same – well,
possibly you already have.

There’s a kind of lost-in-time aspect to this film’s setting, where you can kinda glimpse all manner of pop-culture references endemic to its era … but that don’t seem purposeful. By which I mean, as the ’70s was transforming into the ’80s, there was a lot of bleed between period-specific touchstones. Can these productions serve as literal depictions of life-as-lived? Or is it cinematic artifice?

One thought on “Girls Nite Out aka The Scaremaker (1982)”