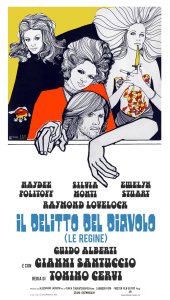 Oh, those damn hippies. Redolent of a bygone era in many different ways, this possibly satirical and occasionally symbolic cautionary tale rarely overcomes its internal obsession with seductive mod accoutrements. Some sorta ill-defined supernatural mystickal powers are also haphazardly invoked from time to time, and some of the soundtrack is given over to the folksy croonings and strummings of Ray Lovelock, who plays David, our carefree guide to pastoral Italian livin’. And absolutely nothing happens, for the most part, although David becomes a plaything for each of three witches in turn, and also eats like a complete pig whenever they supply him with a sumptuous repast. (Seriously, this guy chows down like an ill-mannered slob; this revolting lack of refinement is probably intended to illumine how his devotion to What Feels Good, Man, is leading him down the primrose path.) P.S. Evil wins.

I have to presume it’s the usual boring reason of nomenclature, although in this instance it also may have reminded me of something else as well.

Honestly, in its own way it has an interesting take on what could constitute certain philosophical musings … but it’s also 50-some years beyond its immediate relevance, and in case you haven’t noticed, notions of debating materialism, etc., rarely enter anyone’s mind these days.

This film begins with one of my least favorite types of openings, in this case a solitary motorcyclist riding endlessly through scenic vistas while the credits roll on endlessly. The decor of the evil queens’ little country hideaway is utterly fabulous, especially the humongous portraits of the three of them that dominate the walls. David, that’s a clue, bro.