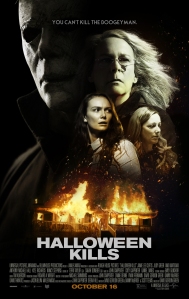 I don’t really have anything positive to say about this picture, so let’s go ahead and make that one fact nice and sparkling clear. What I have, instead, is what may pass for a philosophical question, especially within the realm of a blog dedicated to horror flicks. See, as you may remember, the most recent reboot of this hoary franchise reestablished what constitutes “canon” from amongst the many, many different films that have borne the titular holiday’s name. Thus, in essence, THIS chapter is now part 3, supplanting “Season of the Witch” – which, of course, never fit the storyline as imagined beginning with the first “Halloween II,” a storyline which continued in Halloweens 4 and 5, and on into installments 6 (“The Curse of Michael Myers”), 7 (“H20”) and 8 (“Resurrection”). Now, none of those movies are supposed to count any longer, and yet, in the eternal name of fan service, this flick is littered with flashbacks and referents to … most of them, apparently. You figure out what that’s supposed to “mean,” especially in the context of yet another unimaginative rendition of a generic slasher, one whose most notable accomplishment is transmogrifying “Michael Myers” almost completely into “Jason Voorhees.” Almost makes one want to reconsider Rob Zombie’s take on the reboot-sequel thing. (Almost.)

Should You Watch This MOvie?

That “philosophical question” I alluded to earlier is, basically, how can one invoke that which has been officially erased? Shouldn’t that negate the existence of this very production? (Judging by the results, it does!) Another variant: why bother rebooting something if you’re just going to make it worse, and stupider besides? What’s to gain?