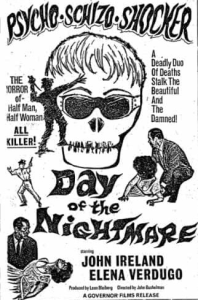 So much a ripoff of Psycho that the main character and culprit’s last name is “Crane,” this no-budget sleazeball melodrama somehow manages to be fairly entertaining, probably because it’s so utterly half-assed. Reminiscent of the artless stylings of other dimestore auteurs (you will see Ed Wood’s name invoked if you decide to read reviews of this production), at least this picture barely bothers with the armchair psychology – especially noteworthy given that one of the characters is a headshrinker. You know, I watched this alongside the preceding film based merely on the similarity of the nonsensical names, yet they share a weirdly similar predilection besides. For a fun parlor game, try to construct a meaningful diagnosis of Jonathan’s paraphilias, I dast ya.

“Day of the Nightmare?” I asked myself. Obscure, black-and-white, obviously some stripe of exploitation, check.

It aspires to bare competence. Maybe. Usually with drivel such as this, I wind up wishing I could spend some time living in the milieu represented. In this case, though, everything is suspiciously antiseptic. Maybe that only heightens the allure.

At one point, a sexpot “patient” is making the move on her “doctor,” and she exclaims, “I don’t need a psychiatrist” – which she pronounces sick-eye-a-tryst – “I need a MAN,” this latter in a breathy stage whisper. Doc replies, “All right, all right … just this once.” Given the carryings-on in this picture, that is likely a bald-faced lie, of course, but with such deft handling of dramaturgy, what else could you reasonably expect. Another poignant moment comes during the thrilling conclusion, when our intrepid investigators pronounce of their quarry, “He’s heading for the amusement pavilion!”

These old horror pictures really appreciated comic relief, particularly from strident women portraying minor characters, and they also relished lampooning petit bourgeois authority, such as this film’s burgomaster. Plus, they really enjoyed overacting to the point of buffoonery, although that can be forgiven due the transition from stage to screen. Now, with all that musing done and out of the way, it is time to allow that this production, though a bit slight, is quite accomplished. “Karloff” – that’s all he’s credited as – does wonders with his role, even under heavy prosthetics, and the script does an excellent job of playing on any variety of emotions in underscoring the plight of “the monster.” The “monster’s mate” doesn’t appear until just five minutes remain in the picture, of course, which is another thing these great old-time movie stars had going for them: pacing and suspense. Realism may be another matter entirely, but given the subject at hand, any such observation is probably misguided.

Johnny Ramone awarded “Bride” first place in his rankings, which overall are pretty fair. (I personally don’t think The Wolf Man and Freaks hold up well enough, but who the hell am I.)

When the mood is right for a picture from this era, such as during Samhain, it would be quite suitable.

The sequence during which the MONSTER busts out of the dungeon in which he’s been confined, evades the hunt, and tumbles into the crypts from which Pretorius and his henchmen are commandeering corpse parts is pretty memorable. Once again, the studio-lot sets are awe-inspiring, at least the interiors. (The outdoor scenes, not so much.) I could have done without the “humorous” touches and their focus on the lowbrow.

Not only is this movie not frightening in the least, this reviewer has no idea how or why it has been lauded through the decades as even a competent endeavor, much less an estimable one. Did I say “not frightening”? It’s completely ridiculous, helped in no way by the laughable attempt at dramatics presented by Lon Chaney, Jr. Let me emphasize the generational suffix; this is not the lauded “Man of a Thousand Faces,” it’s his son, who benefits from this picture’s dime-store makeup disguising his general inability to act naturally. Also not helping: the entire film is very obviously shot on the studio lot. Additionally, it’s dismaying to be treated to no shots of Larry Talbot’s transformations. (Those scenes take place in the various sequels.) A “B” picture through and through, presented such that even the underlying existential crisis isn’t at all provocative.

The Wolf Man is number eight in Johnny Ramone’s top 10.

When we were small children, my older brother and I played with this ancient “Monster” Old Maid set 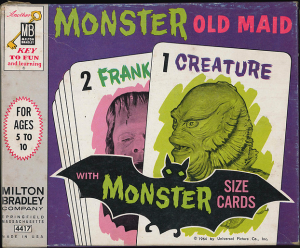 and I always gravitated toward the Wolf Man card.

Do you feel similar nostalgic twinges, I wonder. Maybe you’re a budding film historian. Or a Ramones fan.

The sets are admittedly impressive. Indeed, it’s hard for me to conceive of how much work and preparation went into this two-month shoot, especially when the script itself is so slipshod. For a running time of barely an hour and 10 minutes, certain lines of dialogue are repeated an astonishing number of times. Endearing touches include some of the el cheapo effects and sly, sardonic details bordering on the self-referential, such as this one: 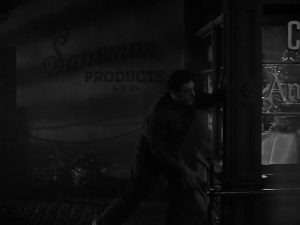