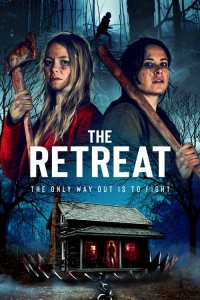 I don’t wanna sound like a straight normal hetero guy, but if this picture didn’t concern a lesbian couple trying to avoid being killed by gay-hating militaristic dark-web content providers, it wouldn’t warrant much mention as anything other than just another genre exercise. As it is, however, it kinda reminded me of The Hills Run Red, at least for the filmed killings. Anyway, I guess you can’t dismiss the zeitgeist, so despite its fairly hackneyed presentation, it is going to attract some attention for what could be read as its sociopolitical statements. Which may be fair enough, but doesn’t ever go far enough, either. For the record, the most hateful character is a rural married woman.

Media commentary about it made the usual claims about it being some kinda subversion of the paradigm, or a similar combo of buzzwords.

Maybe you’d like to contemplate how tepidly this supposedly brash experiment approaches its homosexual themes. You can start with the fact that it focuses on a lesbian couple, of course, instead of two guys, and move right on into observing how remarkably dispassionate their relationship is. (The PR claims that relationship is “rocky,” but c’mon.)

Okay, seriously, there’s a scene in this flick – and this would constitute a SPOILER ALERT, were it not for what I’m about to “reveal” – where our intrepid heroine has to escape her dastardly bonds and does so by … can you guess? Huh? Can ya? DING DING DING! Yes! She breaks her own thumb so she can slide her hand free! WOW! Who could possibly have seen that coming!

Attn. directors: Please stop putting this scene in your movies.

An over-the-top satirical spoof, this Swedish production ladles on the cartoonish violence and gore to an extent its most obvious influence, Evil Dead 2, scarcely dared dream. A multilayered, multi-level meta statement about cinematic sex and violence and censorship thereof, it could just as easily be taken to represent the flipside of its intended aim. I call that effective satire, don’t know about you. Focused on the deteriorating mental condition of the editor charged with abridging the “Loose Limbs” franchise, this flick should entertain splatter fans, people with questionable taste, opponents of moral crusades, moral crusaders who don’t understand irony, and so forth. The last 20 minutes or so drag significantly … turns out the filmmakers thought they were done, only the runtime wasn’t nearly sufficient. Revamped, it ends with a bang and a whimper.

“Guy goes nuts from too much exposure to gore films, mayhem ensues,” is a pretty good come-on. 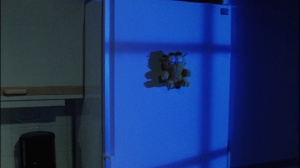 Depends how you view the shibboleth of horror fandom. Director also made 2010’s Insane, which was … not very good. 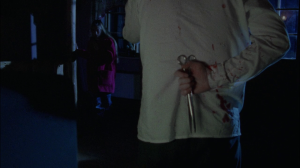 Ninety minutes of condensed sex and violence! Do you call that a great movie? Do you have the slightest idea of what a moral and ethical principle is?

Later, Ed ONLY includes the sex and violence in one of his edits. A “wife and child” subplot is the first indication they may have been making this up as they went along.