An over-the-top satirical spoof, this Swedish production ladles on the cartoonish violence and gore to an extent its most obvious influence, Evil Dead 2, scarcely dared dream. A multilayered, multi-level meta statement about cinematic sex and violence and censorship thereof, it could just as easily be taken to represent the flipside of its intended aim. I call that effective satire, don’t know about you. Focused on the deteriorating mental condition of the editor charged with abridging the “Loose Limbs” franchise, this flick should entertain splatter fans, people with questionable taste, opponents of moral crusades, moral crusaders who don’t understand irony, and so forth. The last 20 minutes or so drag significantly … turns out the filmmakers thought they were done, only the runtime wasn’t nearly sufficient. Revamped, it ends with a bang and a whimper.

“Guy goes nuts from too much exposure to gore films, mayhem ensues,” is a pretty good come-on.

Depends how you view the shibboleth of horror fandom. Director also made 2010’s Insane, which was … not very good.

Ninety minutes of condensed sex and violence! Do you call that a great movie? Do you have the slightest idea of what a moral and ethical principle is?

Later, Ed ONLY includes the sex and violence in one of his edits. A “wife and child” subplot is the first indication they may have been making this up as they went along. 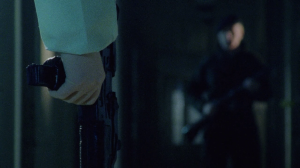