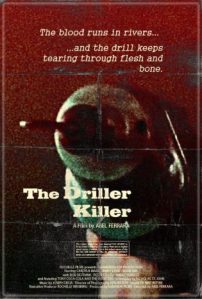 Abel Ferrara’s non-pornographic feature-length directorial debut, in which he also stars under a pseudonym as the main character, a struggling-artist type in the Big City. With two female roommates – one of whom is apparently married and affluent, the other of which is, like, spaced out, man. (The roommates have a shower scene, because it’s very important to the plot.) Of the plot, it must be said, there is one: Reno, the artist, is working on a painting he hopes to sell to the gay art dealer he dislikes but nonetheless depends on, because Reno has no money. Meanwhile, a band called Roosters moves into his same tenement building and practices their discordant off-key blues-influenced new wave at all hours. Naturally, he starts killing derelicts with a power drill. Then things start to go awry. The best parts of this movie are the Roosters, whose music is chaotic and senseless and not “good,” and the utter zeal with which the drill killings are performed. Abel Ferrara: we need filmmakers like him.

I actually started watching this movie because I wasn’t sure if I’d already seen it. Was I confusing it with The Toolbox Murders? Maybe.

Personally, I always find it instructive to watch slice-of-life features set in New York City in the 1970s. The gritty realism permeates the glamorous façade.

A compelling scene involving the three roommates and a pizza pie foreshadows a lot of the movie’s falling action, much as it clarifies the nature of their relationships. (I may be bullshitting you, true, but I did find it fascinating.) Some of the character development stereotypes or is otherwise less than charitable.