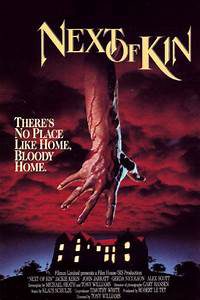 Here’s a rarity for this list: a good movie. Actually good, that is, not “good for a horror movie,” not “good” (scare quotes) – a film that’s well-written, well-acted, well-directed … how the hell did this happen? I feel cheated. Not quite the supernatural assault suggested by the promotional artwork, this Australian feature is a rather more subtle affair centering around strange goings-on in the retirement home the main character has inherited following her mother’s death. These eldritch occurrences seem to have been foreshadowed by similar happenings related in her mother’s diary decades earlier. Are things not what they seem? How DO things seem? WHO can one trust, et cetera. This picture appears never to have had a domestic theatrical release, and the fine lead actress appears never to have had a further career. An understated, somewhat ethereal affair, its scares and the tension it creates are earned by never overplaying its hand and always retaining some rooting in reality. As I said, it’s a good one.

I actually passed on checking this one out several times, as the cover art and the vague synopsis seemed to portend more of a demonic, FX-laden tale than interested me. Obviously, this resistance crumbled.

It’s not going to scare you out of your wits or anything, but it carries itself with and merits considerably more gravitas than your typical horror.

The attention to qualities often underserved or overlooked in horror cinema, niceties such as plot, character development, writing and direction, elevates this drama over many of its fellow travelers. A fairly significant clue to the outcome is given away during the opening moments, and the accents occasionally make dialogue a bit difficult for American ears. (Mine, anyway.)

rating from outer space: a-