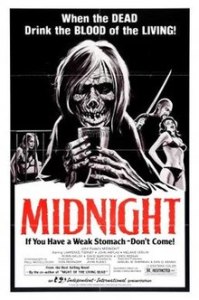 This delight’s got a little bit of everything. It’s got a weird Satanist family cult, it’s got a teenage runaway from Troubles At Home, it’s got Lawrence Tierney, it’s got a road-trip film contained within it, it’s of a visual quality usually associated with home movies from the dawn of time, and it’s got a fabulous theme song that is completely out of place in its grim milieu and sounds as though it’s from the wrong decade besides. Midnight is also strangely paced and edited, and could be a Christian message movie in disguise. Let’s see, what else … travel montages, black characters that seem as misplaced as the title song, a blatant ripoff of Psycho, and an extremely abrupt and unlikely ending involving rescue, redemption and revenge. Oh, and more of the rebarbative laughter à la the goons from Death Weekend. All told, an entertaining exploitation picture – and based on a novel! Which I cannot WAIT to read. The auteur was a colleague of George Romero.

The allure of a low-budget flick involving running afoul of the law and Satanists was too great to ignore.

This is an exemplary achievement in its genre, so if a mishmash of simulacra – both horror and otherwise – filmed quasi-guerrilla-style over a weekend with minimal postproduction is your bag …

The chorus of “Midnight,” allegedly by “Quintessence”:

The “backwoods” angle is trite.

it is easy to identify a Satanist