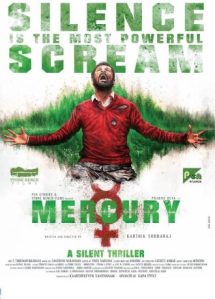 A frankly bizarre eco-horror experiment, this Indian film contains no dialogue; characters communicate with grunts, howls and ululations, with broad gestures and what is apparently some form of sign language that I do not recognize (and which does not seem as though it could be very effective). On occasion, this choice of the filmmaker’s does interfere with one’s enjoyment of his picture, but it’s not as much of a problem as one may surmise. It remains odd and somewhat off-putting, however. WHY there’s no dialogue is implied by some setup shots: the five main characters are graduates of a special school for people with unspecified disabilities, though in this case they’re deaf-mutes. Now, wouldn’t you just know it, some tomfoolery goes horribly wrong and they must face the consequences. Which in this case are supernatural. And then there’s an extremely ironic twist. To be completely honest, this effort’s not exactly coherent, but its hallucinatory elements and creative craftsmanship combine to produce quite an effect. Slight tension arises here and there, not much in the way of fright.

This one only got a shot because it was a foreign production and described itself as “silent” – NOT meaning that it had no sound. (It has plenty of that.) Having just watched a subtitled film, it seemed reasonable.

These aspects are likely more aligned in this instance than is usual; it may be difficult to judge without involving one’s opinion of the unique presentation. This goes beyond the lack of dialogue; the picture is highly stylized in many ways. Even for a movie based largely on unearthly events, though, a few things herein don’t really add up.