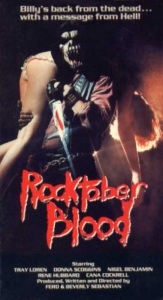 Featured in this astounding straight-to-video accomplishment: Blatant lip-synching, awesomely generic hard rock, a mustachioed dude in a ZZ Top “Eliminator” raglan sleeve shirt, a guy in a gorilla mask breakdancing, a station named “MVTV,” chicks doing aerobics very intensely, multiple Jacuzzi scenes and one regular bathtub scene, a villain that’s a budget Mike Reno of Loverboy, a song (and character) called “Rainbow Eyes.” NOT featured: logic or reason, professional actors, any attempt whatsoever to present a plausible scenario, any original ideas. It does, however, answer the question of what Eddie and the Cruisers would have been like as a barrel-bottom slasher flick. Somebody was asking that question, right?

1984. “Rocktober Blood.” The claim that it was also known as “Rockill” (true, in Belgium). And THEN I find out its working title was “Trick or Treat”! 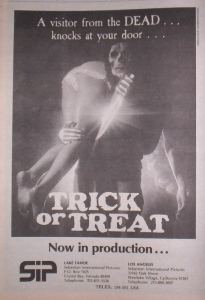 Really, though, it may have been fate: Over the opening shot of recording studio gear, the first words spoken in this picture are, “‘K, Billy, time to rock and roll – here we go.”

If you are currently a teenager living in the early-to-mid-1980s, you will love it.

The real nadir – besides the banal reveal, that is – is that the above clip omits the movie’s inspirational one-handed hammer-on guitar intro. 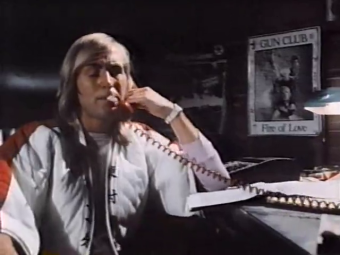 the aerobics scene has the Let There Be Rock film poster