I’ll admit it, I enjoy it a little too much – trotting out the jejune sally that “the REAL horror here is blah blah blah” and so forth – but dig it, man, that foolishness is perfectly suitable for this bonkers English presentation. Oh, don’t get me wrong, this film is for the most part shoddy and boring, but holy cats does it contain some absolutely bizarre goings-on. For one thing, it’s only around 84 minutes long, but it manages to contain a four-minute-plus lesbian scene that is frankly a lot more explicit than I would’ve supposed. For another thing, at a certain point – for no discernible reason – everything goes slo-mo as the soundtrack suddenly becomes extremely psychedelic and discordant. And no kidding, even though the story concerns a space alien who’s on Earth scouting for new “protein sources” (“spoiler”!), heavens to Murgatroyd but that isn’t the REAL horror here. I watched the climactic action of this picture jaws literally agape.

This is the film Mr. Warren made right after the widely acclaimed cerebral exercise Satan’s Slave.

I don’t think I really have an answer for that question. You’re on your own.

The makeup and/or “FX” are, uh, minimally invasive, shall we say.

But seriously, one thing I did find laudable about this very strange flick is that it contains all of six actors. This film’s shortcomings are not a result of its minimal casting or financing, though the latter probably doesn’t help. ’Tis a pity they never made the sequel.  ’Tis also a pity some critics have identified all sorts of subtextual sociological signifiers that were almost certainly tangential to this preposterous undertaking. Sure, sure, I get it, “microaggressions,” I hear ya. [Backs away] 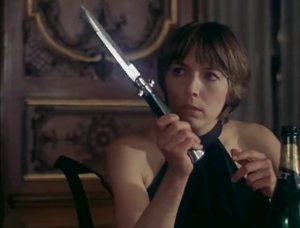 that’s a switchblade, would you believe