First. let me just put it out there: This is one of my favorite movies in this genre. Not only do I still find it to be way above average every time I watch it, but it still blows my mind that it’s as good as it is given that it was what it was. That some Three Stooges nerds from suburban Detroit could just decide, “Hey, you know what would sell? A horror movie,” and go ahead and produce an epochal achievement still defies description and belief. You know, a whole lotta people through the ages have had the thought that they could make a movie, and a great many of those people thought they could make a fright flick, and some of them did, and some of them even did a halfway decent job … but this crew made a bona fide classic. Reading about the process, particularly in Bruce Campbell’s If Chins Could Kill, is almost as much fun as immersing oneself in the films, but nothing compares to what transpires once the Kandarian spirits begin their inhabitations. 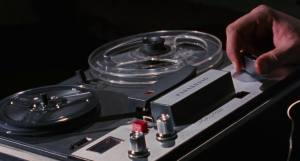 This time, because it’s number seven on the Johnny Ramone list. The first time was because I’d already seen its follow-up.

OK, look, I’ve seen this, 2, Army of Darkness, a fan edit combining all three and clarifying the chronology, the remake, and I loved the recently concluded three-season run of Ash vs Evil Dead. Mine may not be the opinion to seek.

So much here still holds up today: Raimi’s inventive camerawork, the creeped-out nature of the Deadites, some gruesome injuries that remain discomforting. The makeup, on the other hand, is pretty bad, and Ash exaggeratedly slapping his girlfriend around makes for a cringeworthy moment in the modern clime.