So many titles and so many threatening adverts for such a tepid plod whose only semblance of tension arises from the wait for occasional actress and future lad-mag model Andrea Allan to disrobe. Who’s the killer, you might wonder for an idle minute, correctly identifying the obvious attempts at misdirection, and also realizing that you don’t much care so long as you’re assured the picture will be ending. When it does reach that ending, full dark night abruptly shifts to very bright daytime. Clearly, the filmmakers wanted to get it over with, too. Perhaps this is why they don’t bother tying up any loose ends … such as letting us in on why our heroine got 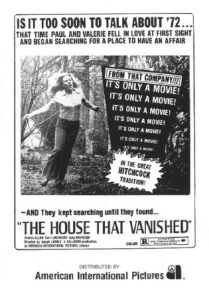 involved in this affair in the first place, or how some of the action could have occurred unless the culprit read the script, or by what means one of the characters ends up dead during the finale when she couldn’t reasonably have been anywhere near the location in question. This movie also contains an incestuous sex scene, because why not throw that in there, too.

I must have been lured in by the promise inherent in the lurid early ’70s British cinema I’ve been “enjoying” of late, but to be frank, I have no idea.

It’s not nearly lurid enough to justify that.

The second murder scene is pretty intense, I suppose, but by that point it isn’t even interesting enough to sustain one’s attention. Some of the leftover mod touches of a foundering Swinging London are amusing. A tangential subplot involving pigeons goes absolutely nowhere. Yes, pigeons.