written and Directed by lewis jackson

One thing I hadn’t expected from this movie (or, to be fair, any movie) was to see Santa Claus being chased by an angry mob bearing torches. As for that horde, it was as though the townspeople were suspiciously well prepared for such a situation. An opportunistic rabble, however, is just one small oddity in a film chock-full of strange events and ideas. Befitting the Yuletide theme, the picture plays out like some sort of twisted fable. A repressed middle-aged man identifies a little too much with Saint Nicholas, his obsession seemingly brought about by a desire for Santa to be real. Of course, he works in a toy factory. He also spies on the neighborhood kids, and his brother’s family, but this may be expected since his pathology was borne of a bit of childhood voyeurism. 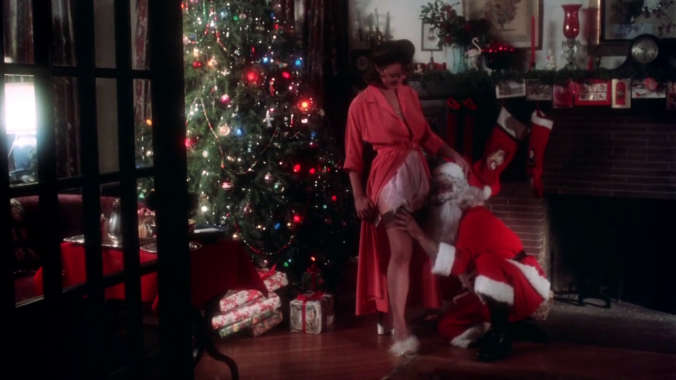 His Claus then becomes a sort of Robin Hood, sabotaging the company at which he’s become middle management and killing a couple people in the process. The saga ends with an impossible scene paralleled four years later in Repo Man, would you believe:

It was Christmas Eve, and I’d just watched the Silent Night flicks the preceding two evenings.

It perverts the iconography a bit, sure, but it essentially reinforces classic holiday-movie themes. Get the whole family together!

A scene where our protagonist gets pulled into a neighborhood Christmas party and dances with the attendees is pretty interesting, particularly as at this point, he should be on the lam. Luckily for him, it appears to be surprisingly hard to follow the trail of a guy dressed as Santa Claus driving around in a big white van with a garish sleigh painted on both sides. 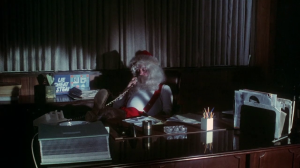