directed by george a. romero 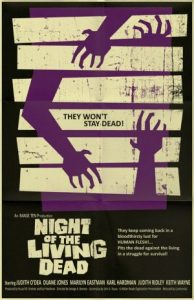 This being one of the more influential and critically assessed horror flicks of all time, I’m not going to waste a whole lot of words here, though I do find it highly amusing that I’d never seen this picture. (I’ve seen Day of the Dead, the completely irrelevant Return of the Living Dead, and such variants as Zombi3, but never the foundation film.) Having previously watched Romero’s Season of the Witch (“aka Hungry Wives”) and The Crazies, I wasn’t completely unfamiliar with his work, but I wasn’t prepared for the early going of this picture to emulate a silent movie, nor the workaday nature of the living dead themselves. The social commentary can be a bit heavy-handed, but that’s kind of a Romero calling card, at least in his auteur guise. A few quibbles: One, the film lacks for a certain logical consistency in how the zombies – er, I mean “ghouls” – act; two, and this just occurred to me during the latter portions of this film, why in the hell do zombies have to eat? They’re dead!

Night of the Living Dead is no. four in Johnny Ramone’s top 10.

So much depends upon a red wheel barrow glazed with rain water beside the white chickens.

The very nature of the low-budget presentation aids it immeasurably, lending it an almost documentary feel at times, and the general lack of histrionics on behalf of the risen dead also helps, their implacable multitudes generating an overwhelming sense of dread as the scope of the danger becomes more clear. Romero’s unadorned direction of his actors at times gives the proceedings a distinctly stagy quality, and his statements tend toward the transparent.

rating from outer space: a- 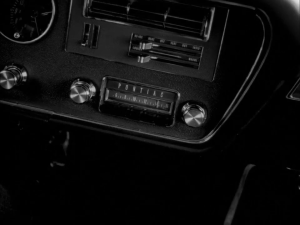