Wow, I might owe an apology to a few of the other terrible movies I’ve lambasted, because compared to this abysmal folly, some of them look much better. While nothing could make films like Home Sweet Home and Monster look “good,” compared to this debacle, a relative respectability may be easier to obtain. It’s hard for me to precisely describe this fiasco, because the script is a disaster, the acting atrocious, the concept absurd, and the pacing and editing undisciplined and unstructured. You probably couldn’t write dialogue this poorly if you tried, and its recital is akin to unlettered folks reading cue cards with missing words and disorderly syntax. It’s astonishing. Unbelievably, the filmmaker claimed that budgetary constraints robbed his flick of its brilliant philosophical insights, but with what’s in evidence, that very idea strikes one as utterly asinine. 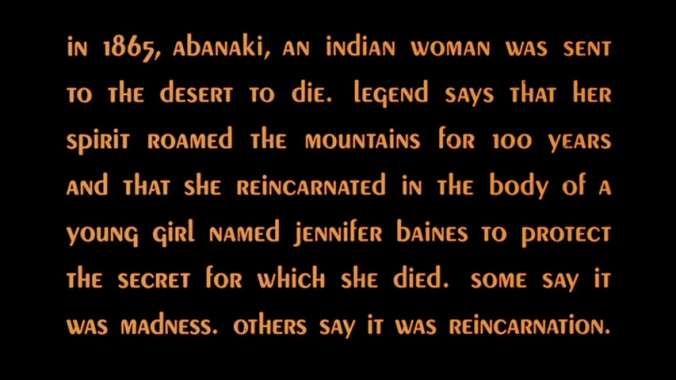 This intro doesn’t mention a “phone booth,” but the poster does. Details below!

The fact that is even a possibility says too much about this modern world.

was a “box-like kiosk containing a public payphone.” A “public payphone” was – I am not making this up – a coin-operated telephone that stood alone in public spaces, so people could use them to make calls.

In this movie, a “phone booth” is erected in a cemetery

for some damn fool reason, and it is claimed that this device allows Abanaki’s Indian spirit to inhabit a terrible English actress, but she never uses the structure until far too late for this to have occurred.

Any claim that reincarnation is involved in this picture is spurious at best.