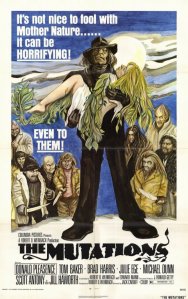 Roger Corman’s name somehow is not attached to this tale of a mad scientist creating hybrid creatures by meshing flora and fauna. “My theory of Total Genetics is all-embracing,” intones the dependably taciturn Donald Pleasence, playing the nutter professor with his hair and beard varying its balance of black and white from scene to scene. Presumably this movie has played countless times on the types of late-night programs that specialize in daffy, misbegotten, or just plain awful cinema. Not merely horror, this flick is equally science-fiction-flavored, all the better for those sorts of showcases. Contents: Plant/human hybrids, plant/animal hybrids, fake deformities, actual sideshow freaks, and a whole lotta stock footage of vegetation. The real star is either the ludicrous monster costume that looks like a deconstructionist Creature from the Black Lagoon (or Swamp Thing, I guess) or the hilarious props in the lab of Dr. Pleasence, a cross between the Little Shop of Horrors and the workplace of Bunsen Honeydew. 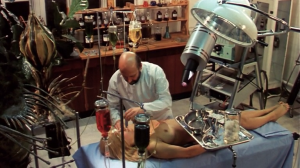 I don’t remember, but probably because it sounded completely ridiculous. And Donald Pleasence.

It’s the kind of presentation you enjoy while wondering how in the world any of the people involved possibly could have been taking their jobs seriously. It’s … definitely amusing.

Once “Tony” escapes the lab in his hybridized form, the proceedings shift into another realm entirely.

It’s almost must-see stuff, almost enough to justify sitting through the rest of it … such as the blatant exploitation of Freaks, for instance. Basically, the plot of Dr. Freakmaker (hmm … ) is grafted onto a rehashing of certain themes of that infamous pic, including an approximation of the “One of us!” scene and an abridged version of the revenge piece.