I was metaphorically looking at my watch during the second half of this formulaic slasher flick, reproaching myself for its selection, then once it was over I decided to read some opinions of it and – wow, you must be joking, internet. Personally, I found this picture to be wildly unacceptable, and not just because it implausibly concerns a murderous supernatural ex-slave bogeyman haunting Chicago’s projects. Sure, that’s improbable, too, but nothing else about this feature is any more reasonable. The ridiculously contrived (and likely inadmissible) police and legal procedures, the intrepid graduate students’ daring thesis research, the architectural lessons, the unthinking racism, the trite dialogue – this one’s got it all and then some!

By which I might mean a Philip Glass score that we hear the same snippet of way too often. Oh, and vacuous voiceovers that aim for grandiosity only to land on ostentation. Plus, also, too, it’s not very frightening.

I’ll admit, I’m beginning to suspect there’s a reason I haven’t seen some of these ’90s offerings.

You’d be better off watching any of the 440-plus episodes of Law & Order: Special Victims Unit. You know, I’ve read one of Clive Barker’s “Books of Blood” collections. Yeah, one.

Certainly, when Virginia Madsen busts out of the institution where she’s been detained for a month with the help of her paranormal hook-handed buddy, I completely lost any semblance of respect for this absurdity. But it just kept going, exhausting my patience. The ending at least made me laugh, partially because it was so predictable, but also because they dragged it out so much. Did I like anything about this movie, I’m wondering. 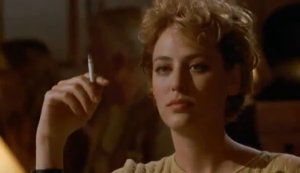