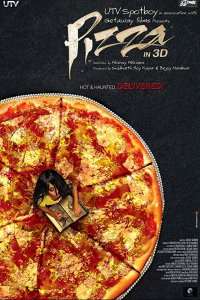 This Indian production, a clever and stylish feature, is unfortunately too clever by half. The revelations that follow a somewhat arduous setup are more than less a cop-out, and as the SHOCKING finale meanders its way to the screen, it provokes not only disbelief but a couple very big questions that are impossible to ignore. This is in addition to the fact that the rather lengthy middle portion of the action itself raises a query or two as it transpires – deservedly so, as it turns out. Though it’s mostly enjoyable anyway, in the end this picture is a little too dependent on its comedic values and doesn’t maintain its attempted eeriness well enough. And it just don’t add up.

Its offbeat title, which does not suggest terror, drew my interest, and when I found out it’s actually a remake of a 2012 film, I had to know more. (Somehow, I missed that the 2012 flick was helmed by Karthik Subbaraj, who was responsible for last year’s Mercury.)

You may well lose your patience during the previously described middle movement, or be exasperated by the wrap-up and finale. I’ll get back to you about the original at some later date.

Several of the musical numbers in this picture serve as diagesis, including the catchy tune during the ridiculous animated title sequence, but I think my favorite factor is the unexplained origin of Slices of Mumbai’s “Pizzaria Napolitana” setting. As hinted at several times, the resolution is unwelcome and more than a little hackneyed, although I suppose credit is due for the filmmakers resisting the urge to double down on the supernatural element … until the dubious conclusion, anyway.