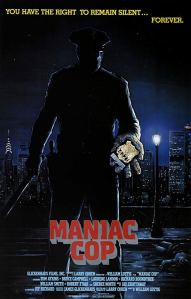 One does not decide to watch a flick with a title like “Maniac Cop” thinking he or she is in for a deep, thought-provoking vehicle for highly skilled thespians featuring a trenchant, thinking-man’s script. And if one did, he or she would most likely be disappointed by this feature produced by the estimable Larry Cohen (and directed by the same guy behind the camera for Maniac, Lustig, a man clearly in need of a thesaurus). In all honesty, this feature is of a slightly higher quality than I’d expected, which probably does it a disfavor. With a sense of restraint belying its name, it never feels like anything more than what it is: a tossed-off cheapie thriller, made for off nights on off-brand cable channels. It’s dumb, occasionally amusing, and doesn’t care a whit about conveying any realism whatsoever – a picture drawn in such broad strokes it may as well involve fingerpaint. The ending is beyond banal.

After experiencing the previous couple Cohen productions, and having enjoyed my first exposure to Lustig’s work, and wondering why I’d never before bothered to watch this succinctly titled pic, it just seemed an obvious choice.

Do you feel as though there’s a void in your life that can only be filled by the incisive philosophy that must buttress a filmic exploration entitled “Maniac Cop”?

So, this production makes a point of focusing on Maniac Cop’s mutilated left hand, to identify the character and also reveal his … condition. In one such shot later in the film, the hand looks completely normal. Such utter disregard for continuity is always amusing. Tom Atkins plays Resolute Cop,