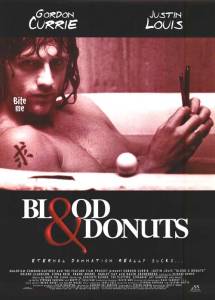 Wow, what an unexpected delight this obscure little Canadian venture turned out to be. An extremely quirky vampire story, this picture succeeds on the basis of some finely attuned performances and bizarre character studies. The minimal sets and locations only help the cause. It’s really more a comedy than a horror story, although given the heavy-handed tactics employed by a couple of thugs who are muscle for a local crime boss (played by David Cronenberg), some scenes are violently uncomfortable enough to pass muster. Oh, and there’s a multifaceted love story going on as well, so hey, there’s something for everyone to enjoy. 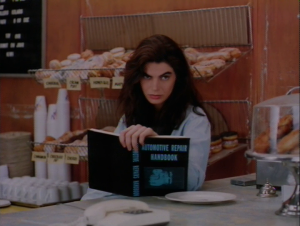 I needed to watch another ’90s movie, saw this title in a list and couldn’t resist. 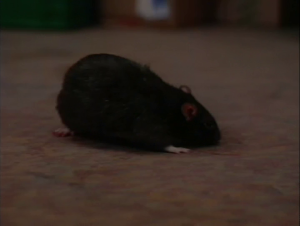 A film this enjoyable should not be this obscure.

Well, the location credits include “The Sea of Tranquility, The Moon,” for one thing. Justin Louis as Earl the taxi driver is absolutely terrific, his skeptical take on his life and everything in it only augmented by his unplaceable accent. Helene Clarkson as donut girl/Nick Cave doppelgänger Molly is equally enjoyable, with her lousy attitude gradually revealing hidden depths of emotion. Frank Moore and Hadley Kay as the thug duo rival those performances as well. I guess what I’m saying is the acting on display here is top-shelf. Some of the FX work – the vampire transformation makeup – isn’t particularly convincing, but it’s used sparingly, so it doesn’t detract much. And while I suppose one could find fault with various aspects of the climax and resolution, it IS a vampire picture, so that may be a bridge too far, you know? Plus, the foreshadowing! 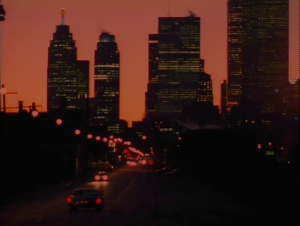