written and directed by christopher landon 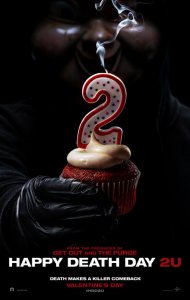 Okay, so, many/most of the same characters from the initial offering appear in this chapter because it reprises some key events, and increases the ramifications of the whole time warp thing. With a clever twist, of course. But in the tradition of sequels, it’s ramped up to service an unforeseen plot development, this time with dialogue noting storyline similarities to Back To the Future Part II. If that sounds dismal, you may be heartened to learn that it basically works despite those compromising factors, though I’m not sure it qualifies as “horror.” A little uneven, a little convoluted, and possibly a little too long, but the first half or so is good enough to make it worthwhile.

Its existence bade me rethink skipping the first one.

As mentioned, it’s less frights, more Doc-n-Marty than the original.

SO, this picture cost around 9 million USD to make, and has grossed at least 64 million USD to date … which considerably dampened studio interest (read: Jason Blum) in producing another. (Think about that the next time you watch some big-budget piece of absolute garbage from Hollywood.) Anyway, the biggest issue this flick has besides general superfluity is that it gives short shrift to what is a fairly important topic, that of the so-called “butterfly effect.” See, it becomes kind of a thorny problem to figure out why only certain details change when Tree is otherwise allegedly reliving the same day over and over again. That concept is introduced and then immediately forgotten for the rest of the film. Personally, I vote for a third part to be made – as a bleak existentialist drama. Take that, profitability.