written and directed by ole Bornedal 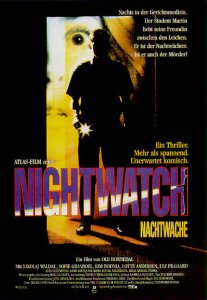 This melodramatic Norwegian thriller unspools very slowly, a study of the intertwined and dissipated lives of two college friends and their girlfriends. Martin, a law student, takes a late-night watchman’s job in a mortuary; his friend Jens seems mainly intent on drinking and causing problems. Meanwhile, a killer’s on the loose. INTERESTING, isn’t it. Little development of the story takes place until very late, at which point we are intended to wonder which of the main characters we are supposed to distrust. The requisite twist is effective enough, as it’s nurtured and revealed with subtlety, and it’s only somewhat after the fact that one realizes one could drive a goddamn truck through the very significant hole in the plot. The movie ends in laughter – on the screen, I mean; it has a happy ending. Bornedal remade it three years later in English. 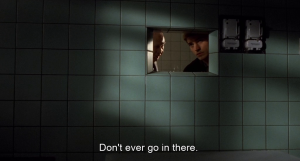 This is yet another title I’ve mulled over many a time. I went ahead with it because it’s a ’90s production, and from Scandinavia.

This is not the film to watch if you demand a lot of exciting action, though eventually significant unease does mount.

An excruciatingly uncomfortable scene in a restaurant bests a similarly embarrassing moment in a church, and the unraveling of the mystery at the picture’s heart is downplayed to such an extent that its solution is presented in a winningly matter-of-fact sequence. Wondrously anticlimactic, it is. In the main role, Nikolaj Coster Waldau did not impress me much as a thespian. I mentioned the inexplicable plot issue, which is nearly as bad as the one that derailed the otherwise excellent Haute tension in 2003.