written and directed by romano scavolini

Despite some questionable casting choices and unconvincing acting in several minor roles, this curiosity is actually a serious study of derangement and childhood trauma, murderous impulses and psychosis, a story of a mental patient who escapes and heads south. Grisly and graphic, it features a helluva shock early on and never settles much into complacency. Unfortunately, the saga drags a bit as it proceeds, especially when it focuses on the obnoxious children of a dysfunctional family. (Mom is little better.) The ending is unnecessarily confusing, especially as it shouldn’t be, due to an inexplicable – and uncharacteristic – refusal to let the camera linger.

Notorious in its day, it fit a bunch of my usual touchstones.

“You lose a dangerously psychotic patient from a secret experimental drug program, and all you can say is ‘I’m sorry’? … Paul, you believed in these drugs and – you rebuilt this man and you did put him back out on the street, but now –he’s out there killing people, and we can’t have that.” 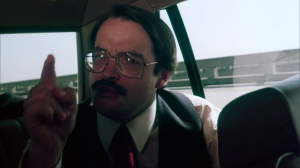 The insanely over-the-top initial murder scene has to top this list, but many other aspects of this production might jostle for position. Baird Stafford’s portrayal of the disturbed lead is unsettling, one particular murder is disconcertingly realistic, and the director doesn’t scrimp on now-amusing portrayals of computer analysis OR graphic shots of female pudenda. (Times Square peep shows.) The lines quoted above are spoken by a character played by the producer, so perhaps unsurprisingly, the production paradox rules here: one might think this film would have been better were it more professionally accomplished, but any such consideration probably would have denatured it too much.