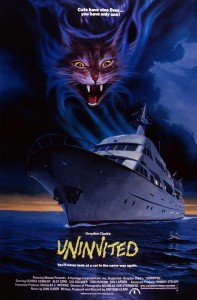 About three-quarters of the way through this inestimable SF/horror hybrid it begins to seem it was forced into its final form via a harried editing process, because scenes come and go abruptly and transitions cease to matter. It’s also around this time that one begins to notice certain amusing facets of the production, such as the repetitious establishing shots and the obvious discrepancies between the dimensions of the yacht we are to understand the characters are aboard and those of the ship we actually see them aboard. And of course, there are the many, many, many images of the cat. The terrifying, deadly, seemingly ordinary tabby cat. Now, budgetary constraints obviously played some role in this tomfoolery, but that can’t explain everything. Whatever the reasons, this hokey straight-to-video picture could have been a whole lot m

ore satisfying. It just never goes quite far enough in any particular direction – much like the malfunctioning vessel that becomes a virtual … DEATH SHIP.

Without Warning was interesting enough, but I don’t think it led me here. There’s always the George Kennedy connection.

I’d like to say it’s good for laffs, but its unintentional humor can’t overcome the sense of tedium.

ordinary cat doing ordinary cat things. Now, I happen to love the furry little demons the human race unwisely invited to share their homes, but such cinematography is incongruous with the desire to create an atmosphere of ill portent. 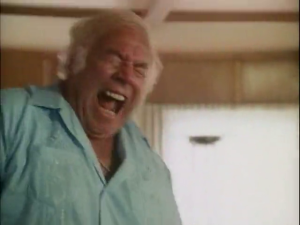