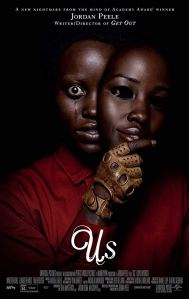 First off, this film was not what I’d expected – which was basically another version of The Strangers and its ilk. It’s much weirder than that, however; Us is one strange flick. Unlike Peele’s first production, Get Out, this one kinda clutters the frame with signifier draped on allusion wrapped in metaphor, and it’s a bit of a muddle. (One could put almost any spin on what it “means” and find a way to support the claim.) It’s also too often funny to be as scary as it wants to be, though at multiple times it conveys a great unease vividly laced with desperation. Laden with references to a smattering of other movies, though, this picture is yet another example of that apparently inescapable factor of contemporary culture. Guess we just can’t not do that any more, even with so much original creative spark seemingly on hand. For me personally, not being much of a cinephile, yawn, whatever.

Get Out was not only terrific, but thought-provoking, a rare combination. So although the early media campaign for this one didn’t make it appear to be anything out of the ordinary, I figured I’d be viewing it at some point.

The running time is a very long ≈ two hours. The ending particularly drags.

Despite its being a little unwieldy and bearing a few untidy loose ends, there’s a lot to like here. The initial appearance of the doppelgängers is both amusing and frightening, which isn’t the easiest trick to pull off, and a sudden revelation that there’s a lot more to the story than has theretofore been presented is powerful yet understated.